What Went Wrong With Godzilla 98? - Inside The Mind Of Dean Devlin 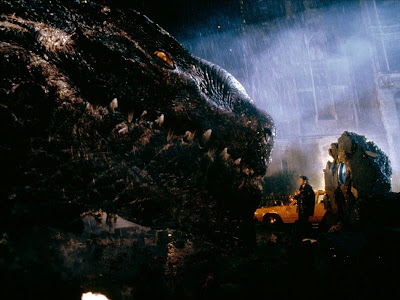 With Godzilla fans around the world nervously awaiting word on who will helm Legendary Pictures / Warner Bros new American G film, it seems fitting that we travel back in time to 1998 to see just what went wrong with Dean Devlin and Roland Emmerich's movie flop.

Since both film makers are ultimately fed-up with fielding questions about their 1998 Godzilla movie, the only way to get a real definitive view on their thought processes is to go back to before G98 became a black mark in Godzilla movie history.

Luckily enough for us, we won't have to use a time machine or force either of the two film makers to subject themselves to a Vulcan mind scan to get our answers. You see back in 1997 a reporter for the UK sci fi magazine, SFX, was granted an interview with Dean Devlin on the set of G98 in Los Angeles. I would like to credit the interviewer here, but unfortunately their name was not included with the magazine article. Regardless, their piece gives all of us an unadulterated view of just what was going through Devlin's mind during the filming of the first American Godzilla movie, and ultimately provides the long-sought-after answers to why the film failed and why the much treasured G94 script by Ted Elliott/Terry Rossio was rejected.

At first the interviewer simply asks why the two film makers would opt to do an American Godzilla film?

Devlin answers, "Tristar came to us a couple of years ago about doing Godzilla, and we actually turned it down.

"We just thought, 'How do you overcome the cheese factor?'

"What you don't want to do is make fun of Godzilla. We really didn't know how to make it properly, and so we passed on it. Actually, we turned it down a couple of times.

"Later on when Jan De Bont got involved, he developed a really good script and even though we decided to abandon that script and go in a completely different direction, what it told us was that it could be done elegantly and straight. And when I say straight, I mean still with a lot of humor, but respectfully."

I think that those comments really speak volumes about how Devlin and Emmerich didn't really know what they were doing, and ultimately didn't even want to make a Godzilla film in the first place.

Here is what Devlin said about reinventing, and redesigning Godzilla, "......Partrick Tatopoulos came over with his drawings of the new Godzilla, what our version could be like. The second we saw the drawings it was like. 'All right! That's it! We've got to do this!

"Because of the limitations of technology, the Godzilla of yesteryear is this lumbering Frankenstein coming down the street. But here we've got this agile , quick, scary and wild creature. Suddenly, all these possibilities opened up. That's when we decided, 'Let's do it!

And how did Toho respond to this new Godzilla design? "Jan De Bont told us that he had had a lot of problems. That every time they'd wanted to make a slight change (in the monsters appearance) it was a big ordeal. So what we did is we went for a completely different look, not slightly different. Totally different. We brought it to Toho, we brought it to the original creators, and said to them, 'Look, this is the way we'd do it.

"They took a long time in deciding and then finally said, 'You know what? We don't even want to comment on it; we'll just say yes or no.' And then they said, 'We love this look, we love your idea and we back it 100%. Go do it.' Because it was so different, it was like a whole rebirth of Godzilla. I think they liked that."

Well, it seems that if you read between the lines there, Toho tried to fight them on the new Godzilla design, but ultimately just gave in. They may have said how much they liked it then, but as you know, they don't much care for it now.

Here is what Devlin had to say about what I think is the worst scene in G98, "The original title was a combination of the Japanese word God and the Japanese word for whale. I don't want to spoil the best gag in the film, but in the picture he's originally called Gojira, but then it gets bastardised in a humorous way."

Throughout the interview Devlin was kinda all over the place when it came to his thoughts about the original, Japanese, Godzilla film series, in one statement he would mention how his film would be a respectful homage to the G films that came prior, then a few statements later he would seem to mock them.

Check out this dis of the Godzilla film series, "Most of the public, used to watching the hokey Japanese versions, will be thinking of men-in-suits and bad models, a kind of dinosaur hybrid who lumbers about in a semi-comical fashion trashing Lego buildings..."

Geez, did Devlin and Emmerich fly to Japan to dance on the graves of Honda, Tanaka, and Tsuburaya? Sure sounds like it!

Good job Tristar, you sure picked a couple of guys who really understood the Godzilla genre to make your G film!

That is the point though, from Devlin's statements it can be ascertained that Tristar was ultimately sold on both he and Emmerich, based on the success they had with "Stargate" and "ID4", and they really didn't seem to care if they understood how to make a Godzilla film or not, a fact that even they admitted to not knowing how to do properly.

In fact, the duo only accepted the gig, if they could do an 'un-Godzilla' movie, in other words, a movie that was nothing like a typical Godzilla feature.

It also explains why Ted Elliott/Terry Rossio's G94 script was trashed, it was for a 'real' Godzilla movie, something Devlin and Emmerich didn't want anything to do with.

I wish that I had the time, and space to post the entire interview. To summarise the parts that I left out, Devlin spends a lot of time bragging about how cool their new Godzilla is, and that it can run 500 miles-per-hour, and also that they had developed a canon that could shoot a 1,700 pound car 477 feet.

You get the idea.

So here we are in the early stages of yet, another, American Godzilla film. Though all the parties involved keep saying the right things, like how much they don't want to repeat G98, and how the film needs to be like the original Japanese films, you need to remember, Devlin and Emmerich were saying things like that in 1997.

Here is another of Devlin's statements, "I think what Roland and I did with 'War of the Worlds' (ID4) was a gas and fun, but it wasn't "Mars Attacks!" We took it seriously. And that's what we're trying to do with Godzilla - reinvent him, as though there was no previous one, but yet being respectful to the origins an intent of the original film."

Now, I'm not trying to make all of you Godzilla fans start loosing sleep or anything, but this is the kind of jargon you always here when remakes are announced. Do I think that Legendary Pictures / Warner Bros will select a director who has little to no respect for the Japanese Godzilla films, who wants to make a film that is nothing like any prior G feature? I sure hope not.

Yet, this is Hollywood we are talking about, and anything is possible.

I, however, do believe that the makers of this new American Godzilla film understand all too well the backlash they would receive if they repeated the prior mistakes of Devlin and Emmerich.

This all good food for thought, don't you think?

Burbank, CA – March 29, 2010 – Legendary Pictures announced today that they will develop and produce a new film based on Toho Company’s famed GODZILLA character. Through the terms of the agreement, Legendary Pictures has acquired the rights to produce a movie inspired by Toho’s Godzilla, a franchise the Japanese company created and has nurtured for over fifty years.

Toho’s GODZILLA franchise boasts one of the most widely recognized film creatures worldwide, resulting in a series of books, television programs, video games and more than 25 films worldwide. Legendary intends to approach the film and its characters in the most authentic manner possible. The company will, in the near future, announce a filmmaker to helm the film for an intended 2012 release. The film will fall under the company’s co-production and co-financing deal with Warner Bros. Toho will distribute the film in Japan."

"Godzilla" is coming back -- this time, with Legendary Pictures taking the lead, co-producing and co-financing with Warner Bros. for release in 2012.

Legendary announced Monday it had obtained rights to the iconic monster character from Japan's Toho Co., which has overseen more than 25 "Godzilla" films. Toho will release the pic in Japan.

Legendary said it's planning to announce a director shortly.

In addition to Legendary, producers on the new film will be Dan Lin, Roy Lee and Brian Rogers. Yoshimitsu Banno, Kenji Okuhira and Doug Davison will exec produce.

"Godzilla is one of the world's most powerful pop culture icons, and we at Legendary are thrilled to be able to create a modern epic based on this long-loved Toho franchise," said Thomas Tull, Chairman and CEO of Legendary. "Our plans are to produce the Godzilla that we, as fans, would want to see. We intend to do justice to those essential elements that have allowed this character to remain as pop-culturally relevant for as long as it has."

Legendary noted the film will fall under its co-production and co-financing deal with Warner Bros. Legendary's productions with Warners have included "The Dark Knight," "300" and "The Hangover."

Speculation about a new "Godzilla" has been active since last summer. The Bloody Disgusting web site reported in August that the project was in development.